Villa Loom is an original Cycladic house that has been furnished with brand new and hand-picked furniture to make your stay comfortable. We’re centrally located in the Chora of Mykonos.

Villa Loom is perfectly located in "Chrora" of Mykonos town, therefore you can walk towards Little Venice, to the best restaurants, bars, shops and clubs. If you are planning to go out of town, the bus and taxi stations are very close to the Villa.

However, due to the limited number of taxis on the Island, we highly recommend you to contact us in order to organise any private transfers you may need.

Loom is a beautiful two floor Villa located in the heart of Mykonos Town, surrounded by top restaurants and shops, just 2 minutes away from the iconic Windmills, and very close to the bus/taxi station. Blending Cycladic with modern elements, Loom is a charming lightfilled villa that offers two bedrooms with king size beds, two bathrooms, a big living room, a kitchen and a private terrace. This fully equipped villa offers Wi-Fi, a washing machine, a fridge,A/C and flat screen TV's in every bedroom. 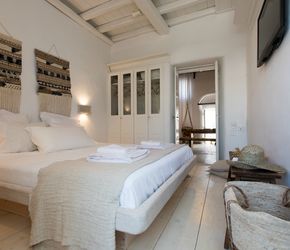 Our Highlights and Features

We accept also cards
Credit and debit cards are a common payment method favored by many customers. We accept MasterCard, VISA.
Best Location in Mykonos Town
Walk out the door and your 3 mins from the top night life bars and discover impeccable hospitality and quality services.
Free WiFi
Unlimited Free WiFi in every corner of the villa, for all your facebooking needs.
Discover Mykonos
Explore Mykonos holidays and discover the best time and places to visit. Mykonos is the great glamour island of Greece...
Housekeeping Premium services
If you like, we can offer you on daily base premium housekeeping and cleaning services. Please let us know, what you need.
Unique Concierge services
From the moment you leave your home until the minute you return, we are here to take care of your every need, always ensuring your experience fulfills your highest standards. Visit our website GREECE CONFIDENTIAL (https://greececonfidential.com/).

Do you need help for your next trip to Mykonos?

What is to know before visit Mikonos?

Flight time: Around three hours and fifty minutes from London

Local laws and etiquette: Similar to most countries in Western Europe.

Tipping culture: Tips are not generally expected but definitely appreciated. Tip taxis as you would at home; most restaurant bills don’t include service (though many do include a €1/90p or €2/£1.80 cover charge for bread) so a suggested 10-12 per cent is welcome.

Public transport: Buses – running from two main stations, one in the Old Port, one in Fabrika Square – are the only mode of public transportation on the island, often running until at least 1am or 2am, and are clean, safe, cheap and punctual. Bus station: 00 30 22890 23 360; timetables: mykonosbus.com

Taxis: Uber does not operate on the island, but there are a couple of local taxi apps –mykonostaxis.com and mytaximykonos.gr – both available to download from the Apple app store or Google Play. There are usually dozens of general cabs available at the airport, where it will cost around €10-€15 (£9-14) to get to Fabrika square in Chora (the main town).

Etiquette when self-driving: It’s tempting to say it’s every driver for himself, but here, especially the closer you get to Chora, you have to drive slowly and with care as the roads can be fiendishly narrow, and those big, wide public buses lumber along them regularly.

Greetings: Handshakes are standard, or hugs between friends.

Any atypical laws/customs (for British readers) that one should note when visiting: Smoking is still prevalent throughout Greece, both indoors in public areas (eg bars, restaurants, clubs) and outdoors. And while several areas on some of the public beaches are specifically designated nudist, if they are not, it’s unwise to strip off in front of families.

General points of safety: Mykonos is one of the most liberal parts of Greece, and, perhaps due to its higher prices, doesn’t attract much of a criminal element. There are, however, several beggars who populate the streets so you may want to keep a close eye on your wallet.

What are the most popular things to do in Mykonos with kids?

The most popular things to do in Mykonos with kids according to Tripadvisor travelers are:

What are the best boat trips from Mykonos?

What are the top attractions to visit in Mykonos?

The top attractions to visit in Mykonos are:

Please contact us if you have any questions or special requests